Taluks in Nalgonda district include Nalgonda, Suryapet, Bhongir, Miryalaguda, Ramannapet, Huzurnagar and Devarakonda. All these places have popular tourist destinations which are a source of revenue for them.

The former name of Nalgonda was Neelagiri (Blue Hill).

The Nagarjunasagar-Srisailam Tiger Reserve which is spread over five districts is the largest Tiger Reserve in India. The Reserve spreads over Nalgonda District, Mahbubnagar district, Kurnool District, Prakasam District and Guntur District.Even the multipurpose reservoirs -  Srisailam and Nagarjunasagar are located in this reserve. 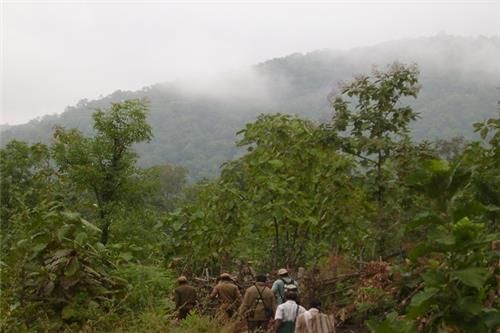 You will see Nallamalla hills all around with greenery which looks appealing. Gorges, plateaus (such as Amrabad, Srisailam, Peddacheruvu, Sivapuram, Nekkanti) and valleys are also there in this region! Waterfalls in the reserve include the Ethipothala Falls, Pedda Dukudu, Gundam and Chaleswaram.

The Nagarjunasagar-Srisailam Tiger Reserve has been renamed as Rajiv Gandhi Wildlife Sanctuary in the year 1992.

The region comprises of ruins of the ancient Nagarjuna Viswa Vidyalayam (Buddhist School), ruins of a fort of the 3rd century Indian ruler - Ikshwaku Chandragupta, an ancient 169 kms. wall constructed by the Kakateeyas and many other forts which are visible on the banks of the Krishna River. This is not all! There are a number of rock shelters and cave temples such as Akka Mahadevi Bhilam, Dattatreya Bhilam, Umaa Maheswaram, Kadalivanam, and Palankasari.There is an environmental educational centre in the reserve. 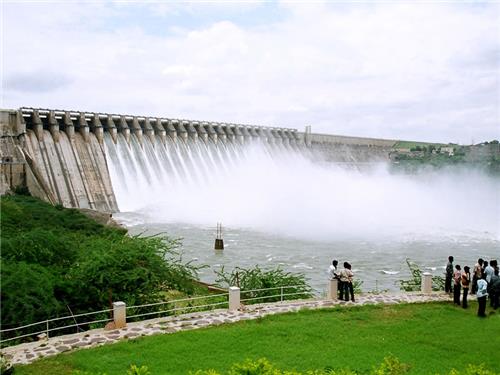 This is a popular Buddhist site and is located about 150 kms. from Hyderabad. It is named after Buddhist saint and scholar Acharya Nagarjuna who is credited with setting up a learning centre here. Nagarjuna Sagar dam, world's tallest masonry dam is also situated at this place.

When the dam was being built here, ruins of ancient Buddhist civilization were excavated from this site. The relics from the 2nd and 3rd century have been preserved and displayed in a museum on the nearby Nagarjuna Konda, located in the middle of the man-made lake. There is a huge statue of Buddha too on this site which is visible from a distance. Tourists board a boat at a jetty near Vijayapuri township. 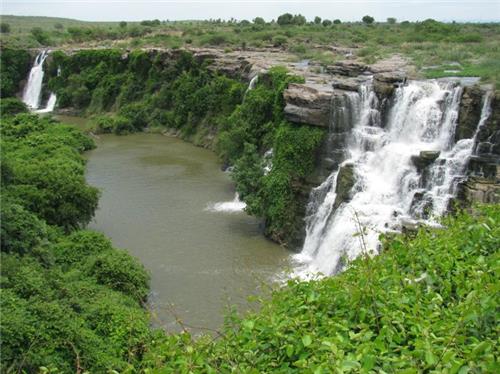 Just 11 kms. from the dam is the Ethipothala falls. The Chandravankas stream falls from a height of 21.3 metres into a lagoon and flows further through a green valley. The waterfalls have been named after a priest named Ethi who meditated inside the caves above.

There are some cave temples in the region which are much frequented by local people. Ethipothala Waterfalls is 150 kms. from Hyderabad by road. 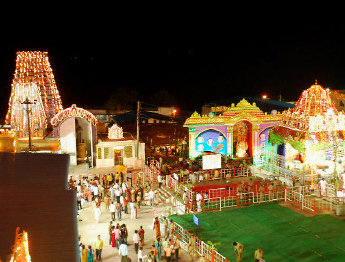 The temple of Sri Laxminarsimha Swamy at Yadagirigutta is known as second Tirupathi and attracts a large number of devotees. It is situated on Secunderabad-Khajipet road, 60 kms. from Hyderabad. Buses are available from Hyderabad and Bhongir to this temple.

According to a legend, years ago, son of sage Rishyatunga --- Yadarshi, did penance here. Pleased by his devotion, Lord Laxminarsimha Swamy appeared before him in five forms namely Wala, Yogananda, gandaberunda, Ugra and Laxminarasimha.


Prayer Timings in the Temple

Distance from Other Cities 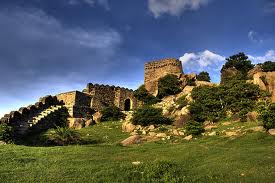 Bhongir fort was built on a large monolithic rock by Western Chalukya ruler Tribhuvanamalla Vikramaditya VI. The place came to be known as Tribhuvanagiri after him. However, gradually, the name was changed to Bhuvanagiri till it actually became popular as Bhongir!

The fort is located on in the centre of Bhongir town which is situated on Hyderabad-Warangal Highway. You will be mesmerized to see the splendid royal courts, the awe-inspiring rock on which the fort has been built and the citadel (Bala Hisar) which gives a bird's eye view of neighbouring area from above.

Bhongir fort is closely associated with queen Rudramadevi and her grandson Prataparudra's rule. The fort is located at an altitude of 500 feet on a hill! It is spread over 40 acres and was built in the 12th century. 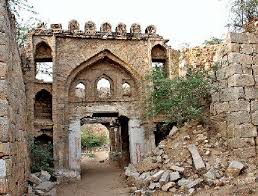 This fort is in ruins now. Years ago, it was the stronghold of the Recherla Chiefs. However, tourists who are inclined towards archaeology visit this site. Seven hills surround the fort which is otherwise well connected by road with important cities like Nalgonda, Mahbubnagar, Hyderabad and Miryalguda.

Wadapally village is located in Miryalguda Mandal. According to a legend, this is the place where around 6000 years ago, sage Agasthya Maharishi installed the idols of Sri Meenakshi Agasteswara and Sri Laxmi Narsimha at holy sangam of river Krishna and river Musi in this village.

During excavation at this site, idol of Lord Shiva was found and installed here. The Siva Lingam here has holes in it! These holes are filled with water but the level of water never recedes even if anyone takes out water from them. Once, when Sri Sankracharya tried to decipher the reason behind this miracle by inserting a spoon tied to a long thread, he was astonished to find stains of blood on the spoon on pulling out the thread. He realized his mistake and begged pardon from Lord. Devotees come to this temple to pray for health and prosperity. Vadapalle (near Vishnupuram) is the place where river Krishna and river Musi meet in the shape of 'L' to flow jointly thereafter.

Kolanupaka is a village in Nalgonda district. The Jain Mandir was renovated to restore its grandeur. It is located near Alair and comprises of 3 idols of Lord Adinath (or Sri Vrishaba Deva and first 'Theerthankar' in Jain religion), Lord Neminath and Lord Mahaveer along with 21 other 'Theerthankars'. This Jain temple is 800 years old!

It is believed that Kolanupaka was a centre of Jainism much before 4th century when Jainism was prevalent in Andhra Pradesh. Ruins of old forts can still be seen here. This place was made the alternate capital of the Kalyani Chalukyas in the 11th century AD. 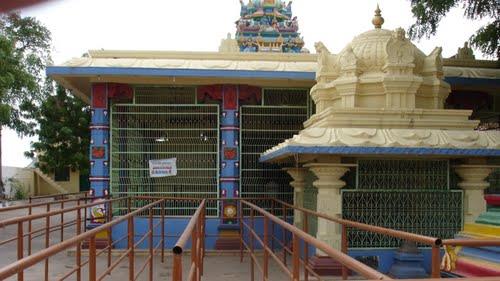 The popular name of Mellacheruvu is Daksina Kasi (Varanasi of the South). The temple of Swayambhu Sambhulingeswara Swami depicts glimpses of Kakatiyan architecture. At the top of the lingam in the temple, there is a hole (2 inches in circumference) which remains full of water in all seasons! People also believe that the lingam is growing in height! It is evident from the fact that for every 0.305 metre of growth, round lines are formed on it. Kumkum or vermillion dots are applied on the six lines on the lingam and devotees pray fervently.

Mahasivarathri is celebrated in the temple every year with a large number of devotees attending prayer sessions. Tourists and devotees throng from districts of Hyderabad, Guntur, Warangal, Krishna and Nalgonda during 'Kalyanotsavam'. 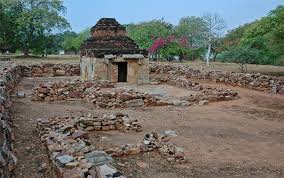 This is a small village on the banks of Krishna river. Many Buddhist structures such as pillared halls, monasteries etc. were excavated and later displayed in a museum of Central Archaeological Department.

The most significant structure discovered here was Ikshvaku citadel with a great fortification wall, ditch, gates, army barracks and rectangular stadium! Nandikonda is 65 kms. from Miryalaguda. 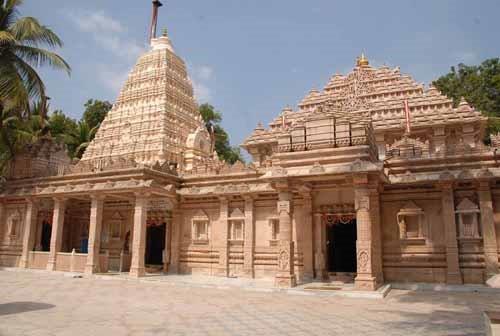 Panagal is a place near Nalgonda. The shrines here are examples of medieval Deccan temples. The main shrine is dedicated to Lord Shiva with Nandi. There are 66 pillars with scenes of Ramayana and Mahabharata etched on the four central pillars. The outer walls have clear and intricate images of dancers, gracefully carved and speak out loud about the excellence and perfection the artisans and sculptors had attained at that time! The Chayala Somalingeswara temple is near Panagal.

Pillamari is a village with many temples which are maintained by the State Government. These temples depict architecture prevalent during the Kakatiya period. You will love to witness carved stone pillars, treacoes and inscriptions which relate about Kakatiya rulers such as King Ganapati, King Rudradeva etc.Ancient coins have also been found at the site.

Do you know that Pillamari is the birth place of famous Telugu poet Pillamari Pina Virabhadrudu?

People throng the temple to pray at the sanctorum of Lord Chennakesavaswami which is also the annual celebration for paying obeisance to the temple deity. It is organized in the months of February-March. 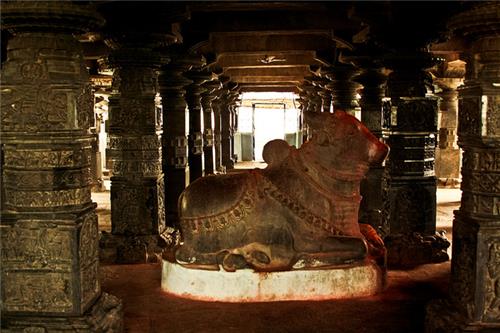 The temple, also known as Chaya Someswara temple, is named so because there is a mystic shadow (chaya) formed above the lingam placed on the ground. The temple is surrounded by many pillars but one is unable to comprehend which pillar is casting its shadow over the lingam! This is an everlasting shadow formed any time of the day on the linga. The shadow remains stationary from sunrise to sunset!

The temple is visited by devotees in large numbers especially during Sivarathri. The temple is regarded to be one of the finest and imaginative work of Kakatiya architecture. There are inscriptions in the temple which belong to Rudraamba's time.

Pochampally was the place of origin of the Bhoodan movement (Bhoodan Yagna) under the leadership of Acharya Vinaba Bhave in 1950. He pleaded to make donation of land to landless poor. 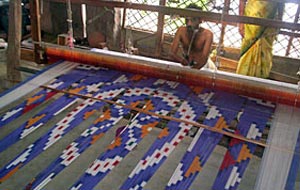 Another reason why Pochampally is famous world over is sarees! Yes, Pochampally sarees are beautifully knitted sarees crafted with dedication by artisans in Pochampally.Ikkat is an ancient way of creating design by tying and dyeing.

Rachakonda is a popular tourist destination in Nalgonda district. The place is located amidst hill ranges. Rachakonda is a region of immense archaeological interest. The 'Dasavatara' sculptures in the cave near Pattabhigutta and five temples in this town depict Kakatiya art and architecture.

You must have heard about Rachakonda Fort too! An ancient fort worth paying a visit to enjoy the historical saga of ancient rulers.

All these tourist destinations are interesting and worth visiting. Do chalk out a programme of visiting these tourist places in Nalgonda district and rediscover the new state - Telangana in India!